The Redmoor Project (“Redmoor”) is located between the village of Kelly Bray and the small town of Callington in southeast Cornwall, United Kingdom, approximately 25 km by road from the city and port of Plymouth, and 40 km from the recently commissioned Drakelands (Hemerdon) tungsten mine and processing plant. The area has well-established infrastructure and is located in the historically significant Cornish tin – tungsten – copper mining district. 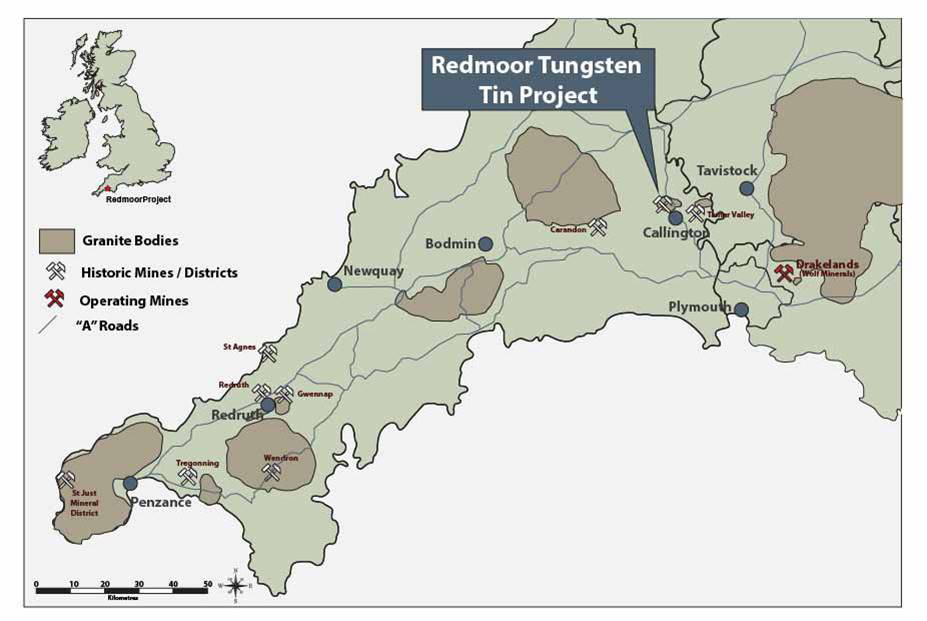 The original Redmoor Mine is one of a group of mines (Redmoor, Holmbush and Kelly Bray) that were opened in the 18th century and continued operating until 1892 when they were forced to close due to low tin prices. Sections of the Redmoor Mine were re-opened between 1907 and 1914 and again in 1934. Historical records show operations at the Redmoor Mine, Kelly Bray Mine, and Wheal Florence Mine. The licence area has records of the production of 574 tonnes of tin, 268 tonnes of WO3, 852 tonnes of copper, 153 tonnes of lead and 9,179 ounces of silver.

In May 2016, SML entered financial arrangements with New Age Exploration Limited (“NAE”) and, ultimately, acquired 50% of the Redmoor tin/tungsten exploration project through subscribing for shares in Cornwall Resources Limited, the joint venture operating vehicle that holds the Redmoor licence.

Redmoor has an exploration licence which provides the rights to explore over the entire licence area for a period of 15 years and the mining lease option provides the right for Redmoor to enter into a 25-year mining lease (renewable for a further 25 years) over any part of the licence area. The mining lease permits commercial extraction of the minerals, subject to obtaining planning and other approvals, and is subject to a 3% net smelter return royalty payable to the mineral right owner once commercial production has commenced. Surface land access for exploration drilling and mining over part of the Redmoor deposit is also included in these agreements.

The geology of the Redmoor Project is typical of other established mining areas of Cornwall. Tin, tungsten and sulphide mineralisation is spatially related to granite intrusions, which caused mineralising fluids to be mobilised along fractures and faults in host rocks. Redmoor is located adjacent to the Kit Hill granite intrusion, which is the focus of a number of historic mines, both within and contiguous to the east of Redmoor’s mineral rights.

At Redmoor, tungsten and tin-oxide, and other base metal sulphide mineralisation occur both in discrete veins or lodes (e.g. Johnson’s Lode, Kelly Bray Lode) and within a zone of numerous closely-spaced sub-parallel narrow mineralised quartz-veins known as the Sheeted Vein System (“SVS”). The SVS contains High Grade Zones where there is a higher density of mineralised quartz veins. These High Grade Zones within the SVS form the basis of the current, 2018 Redmoor High Grade Inferred Resource. 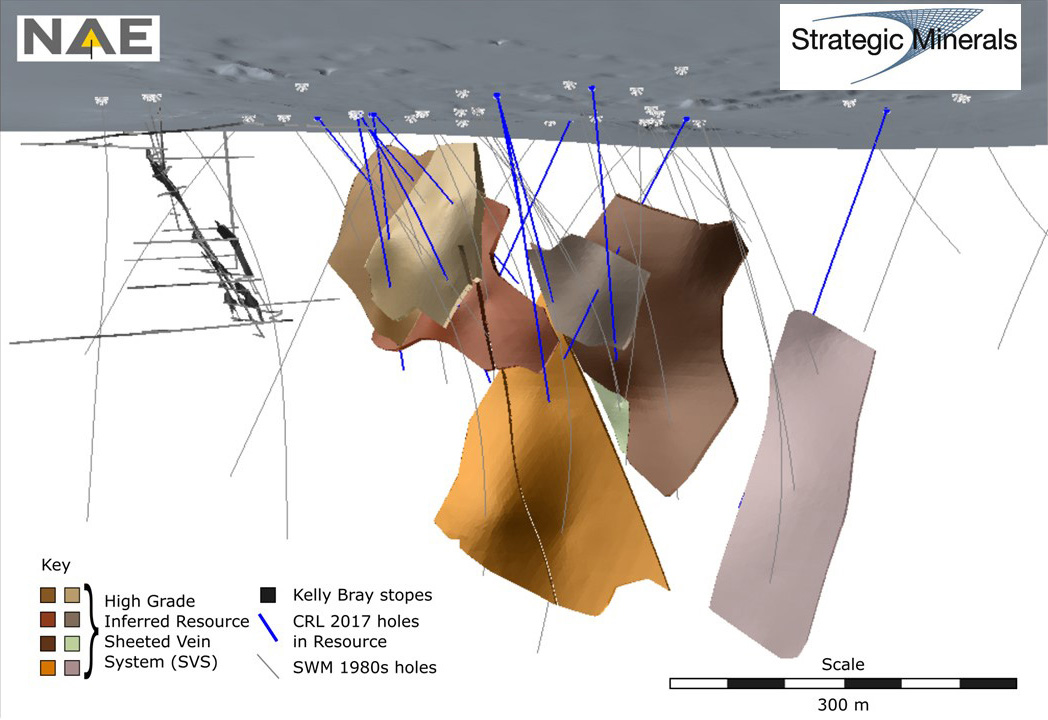 The majority of the these drillholes were angled and designed to intersect true thickness of the target lodes. All holes were downhole surveyed with core split and assayed for metals including tin, tungsten and copper in mineralised zones.

Two metallurgical testwork programmes were undertaken on composited samples of crushed diamond drill core. The results of this testwork were used for flowsheet and engineering design of the processing plant. A mine design was produced along with feasibility studies aimed at constructing a mine and processing plant at Redmoor. However, as a result of the tin price crash in the 1980s arising from the collapse of the International Tin Council, the project did not proceed.

In 2015, prior to SML’s involvement in Redmoor, NAE completed a detailed review of previous metallurgical testwork and, through its consultant, Devlure, concluded that the Redmoor ore is coarse grained, a simple, low-cost ore to process and that overall process recoveries of 68% tin, 72% tungsten, and 35% – 85% copper (depending on flowsheet design) are expected.

In 2017, Redmoor drilled 20 diamond holes for 7,046m in total. This programme was successful in identifying high-grade zones within the SVS which have formed the basis of the 2018 High Grade Inferred Resource. 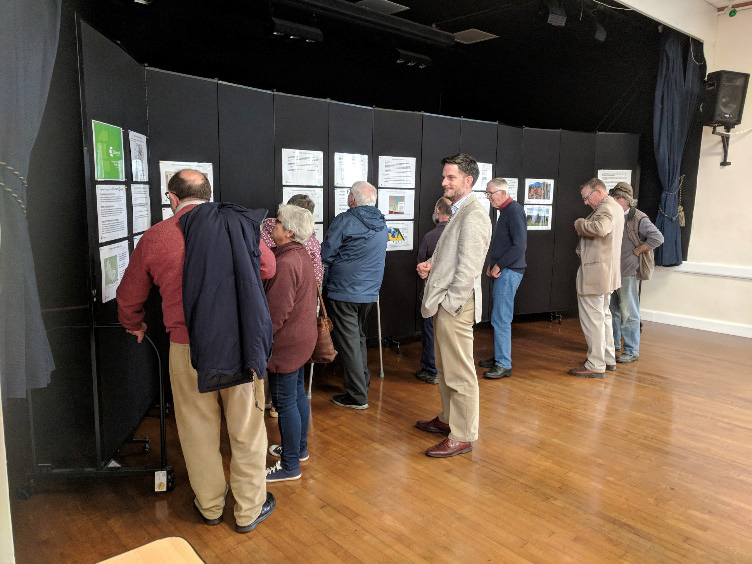 Minimising community and environmental impacts are a precursor to any exploration activities undertaken at Redmoor. Positive community engagement was maintained throughout the 2017 drilling programme, with 14 community meetings held to date.

No complaints were received from the local community despite operations being in relatively close proximity to residential and rural properties. Redmoor          has also aimed to maximise local employment and collaboration with local universities.

A community consultation programme was undertaken prior to commencement of the 2018 drilling programme. Held at the local Callington Council, this involved three sessions providing locals the opportunity to review the proposed 2018 drilling programme and to raise any queries and concerns they may have had about the project.  This was attended by Redmoor personnel along with John Peters, Managing Director of SML and Jeff Harrison, Non-Executive Director of SML. The almost unanimous sentiment was of encouragement and was reflective of the Cornish mining mentality. 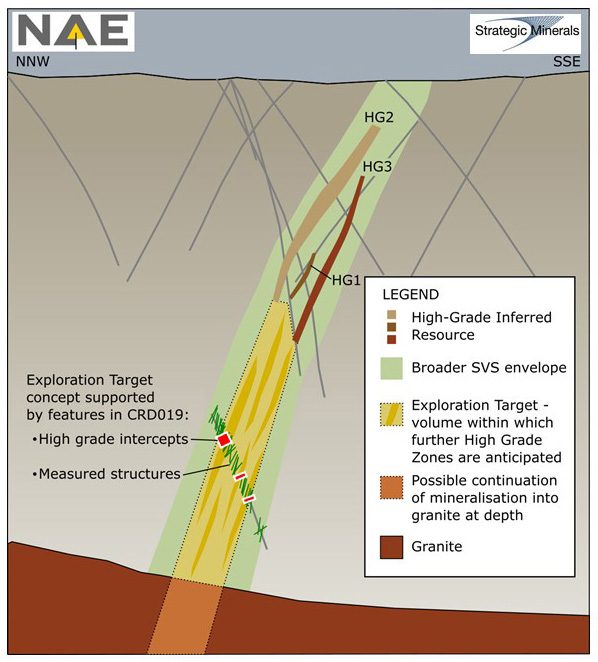 SRK UK also identified a high-grade exploration target within the SVS of 4-6 Mt with an estimated grade between 0.9% SnEq and 1.3% SnEq.

A consulting metallurgist, experienced in processing Cornish ores, has been retained by Redmoor to guide future metallurgical testwork.

Consultants Mining One completed a mining study in May 2018, which utilised the 2018 resource to produce a potential scoping-level mine design, life-of-mine schedule and mining capital and operating cost estimates.

An economic assessment of the project based on the 2018 processing, surface infrastructure and mining studies has been carried out by Redmoor and has shown that the Redmoor project is economically attractive, especially if the size of the resource can be increased.

Redmoor commenced a fully funded 2018 Phase 1 drilling programme (4,000m) in June 2018 to focus on extending the high-grade resource at Redmoor and aim to add a significant portion of the 4-6Mt exploration target to the resource. Subject to the results from Phase 1, it is expected that the drilling programme will be expanded.

It is the joint venture’s contention that the grade of the inferred resource increases with depth. Accordingly, the 2018 drilling programme has focused on the Exploration Target which is expected to be deeper than the existing resource and may also lead to an increase in the overall grade of the resource.

A general permitted development order (GPDO) has been obtained for the 2018 drilling programme and consultation with landowners, local community, local councils and other key stakeholders forms an integral part of the drilling programme planning and implementation. 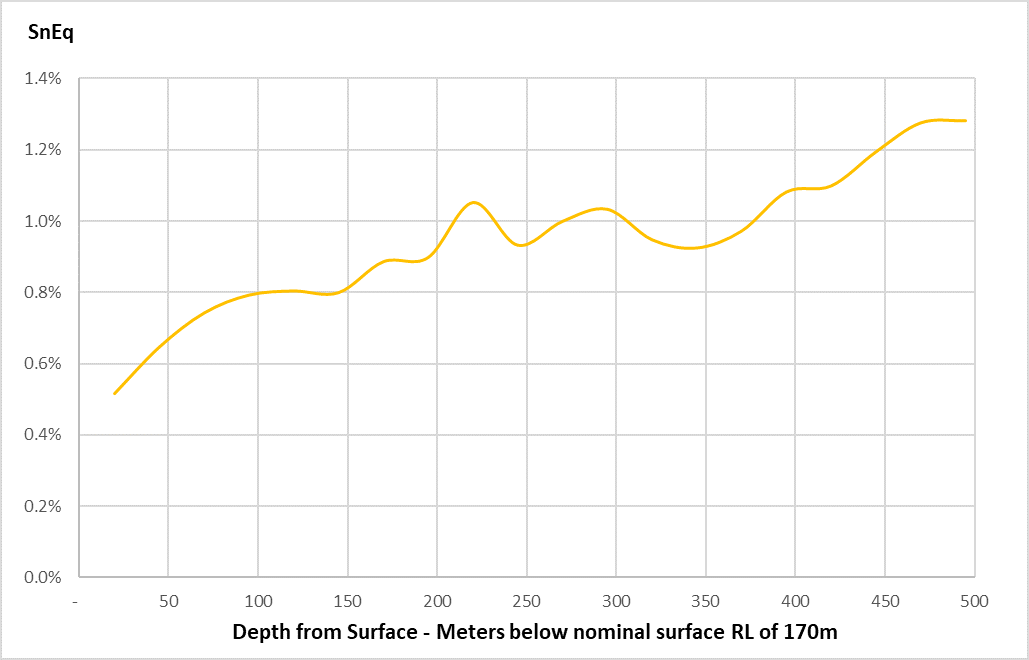 To date, Tin has not enjoyed the publicity of many other metals and minerals, such as Cobalt and Lithium, associated with developments in technology.  However, as demonstrated in the following chart produced by Rio Tinto, it is a metal most likely to benefit from demand from aggregate new technologies. 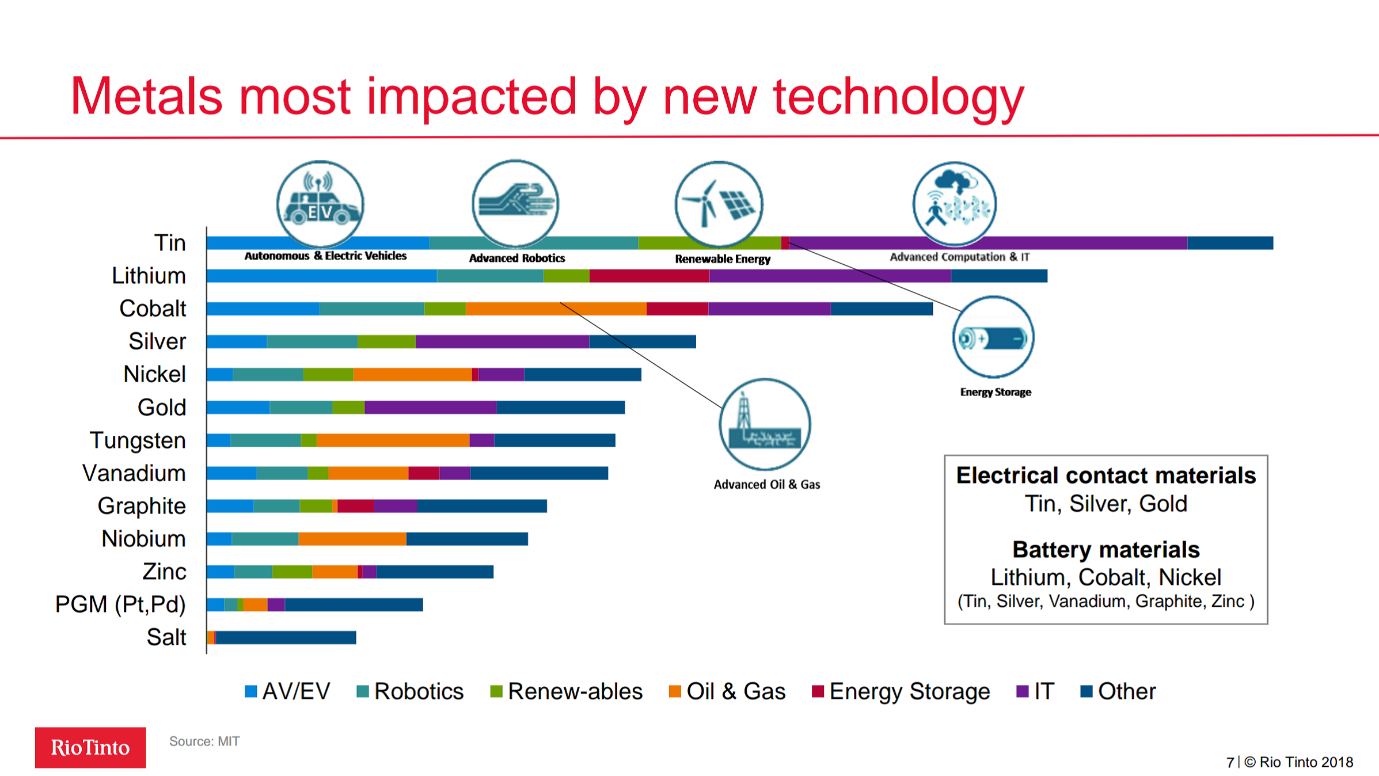 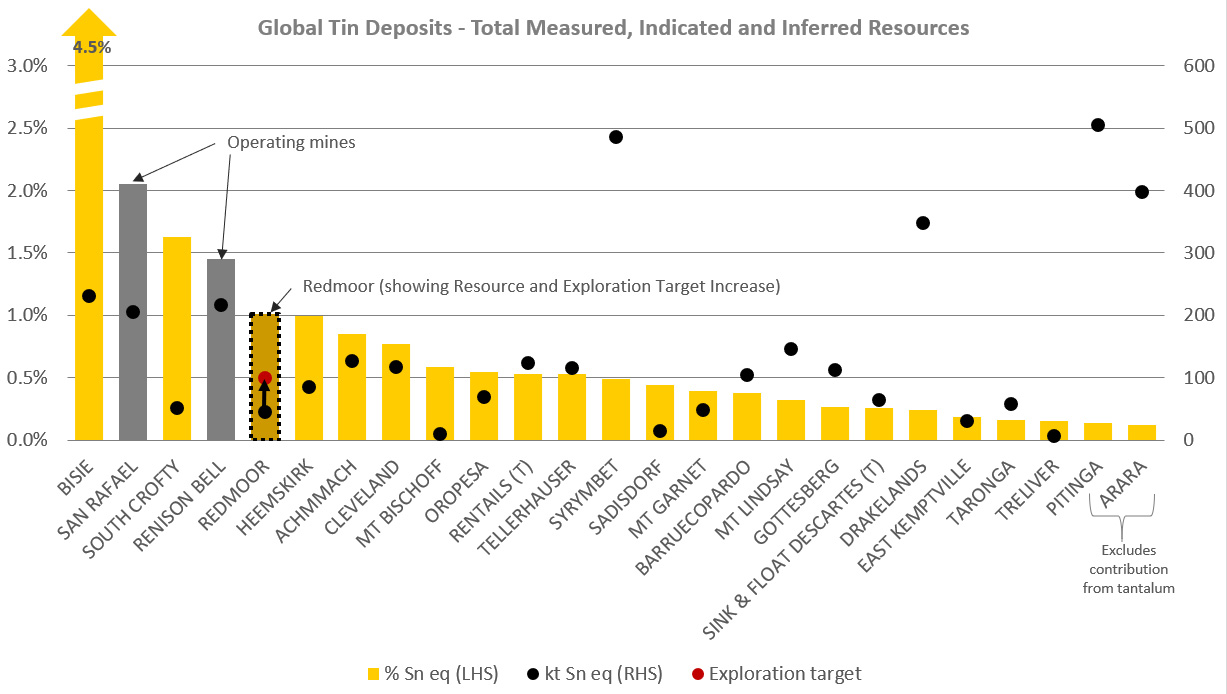 The Redmoor Inferred Resource has 45,000 tonnes of contained tin equivalent and the Exploration Target has the potential to increase this to 100,000 tonnes via further drilling planned for 2018. If successful, Redmoor will become a world-class project in terms of contained metal.

Personnel involved in the Redmoor project are employed through the joint venture vehicle (Cornwall Resources Limited) and, as such, are not directly employed by SML. 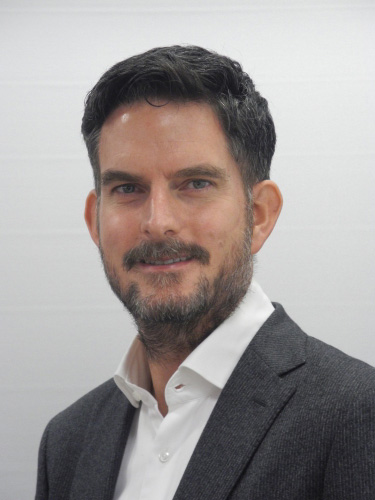 Mr Grist is a Geologist with more than 20 years’ experience in exploration and mining project development.

Originally from south-west England, he has played a leading role in projects in Europe, the Middle East, and Africa, including in taking projects from grassroots exploration through feasibility and into development.

Brett graduated in Mining Geology from the Royal School of Mines, and is a MAusIMM with CP status, as well as an FGS. 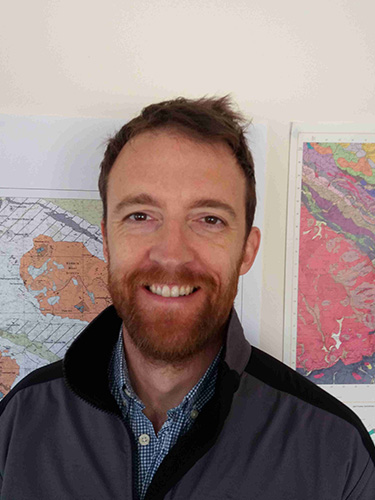 Dr Blight is a Geologist with 11 years' experience in exploration in Africa, Europe, and the Middle East, covering a wide range of deposit types and commodities.

James specialises in structural geology, geochemistry and resource modelling. James graduated with a PhD in Geology and a Masters in Applied Geology from the University of Leicester, UK, and is a member of SEG and an FGS.